185 shares
5 from 11 votes
My grandmother's Homemade Brownies scratch recipe is one of my most treasured recipes.  Her brownies were soft and chewy and oozing with chocolate flavor.
Prep: 10 minutes
Cook: 30 minutes
Total: 40 minutes
Jump to Recipe Print Recipe 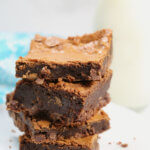 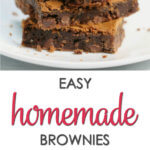 My grandmother’s Homemade Brownies scratch recipe is one of my most treasured recipes.  Her brownies were soft and chewy and oozing with chocolate flavor. 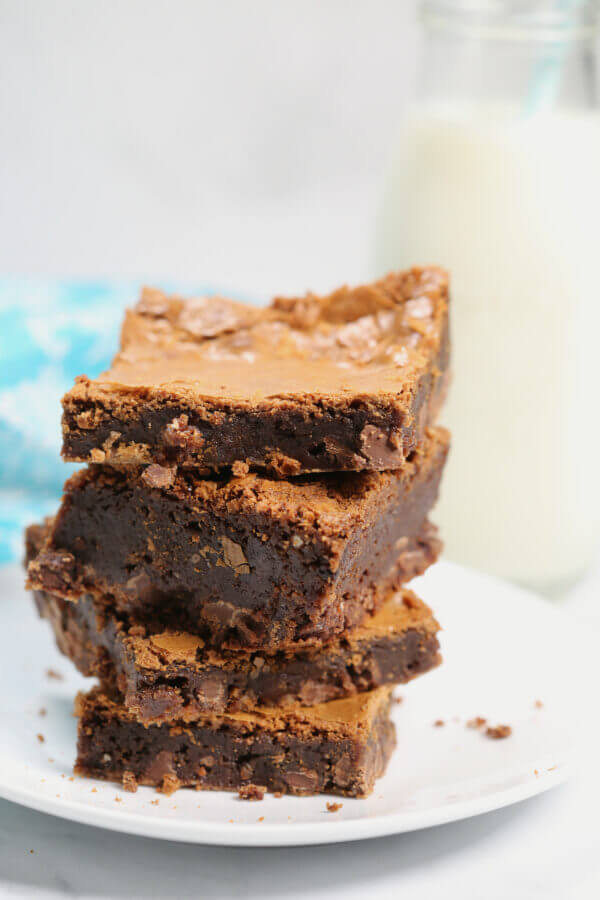 My Mammy (my mom’s mom) was well known in our family for her brownies.  She was also well known for her Forgotten Meringue Cookies and Zucchini Cookies but her brownies were her biggest claim to fame.  Thick, chewy, chocolately. Her homemade fudge brownies were the best I’ve ever tasted.

We would always request that she make them for every sleepover, family dinner or just because.  They were a staple in our family for as long as I can remember.

This is a sponsored post written by me on behalf of American Dairy Association North East.

There is no need to use a boxed mix when you can make this incredible homemade fudge Brownies recipe from scratch.  There aren’t any hard to find ingredients or complicated steps.  The entire recipe comes together in less than 5 minutes.  And, you probably already have all of the ingredients on hand. 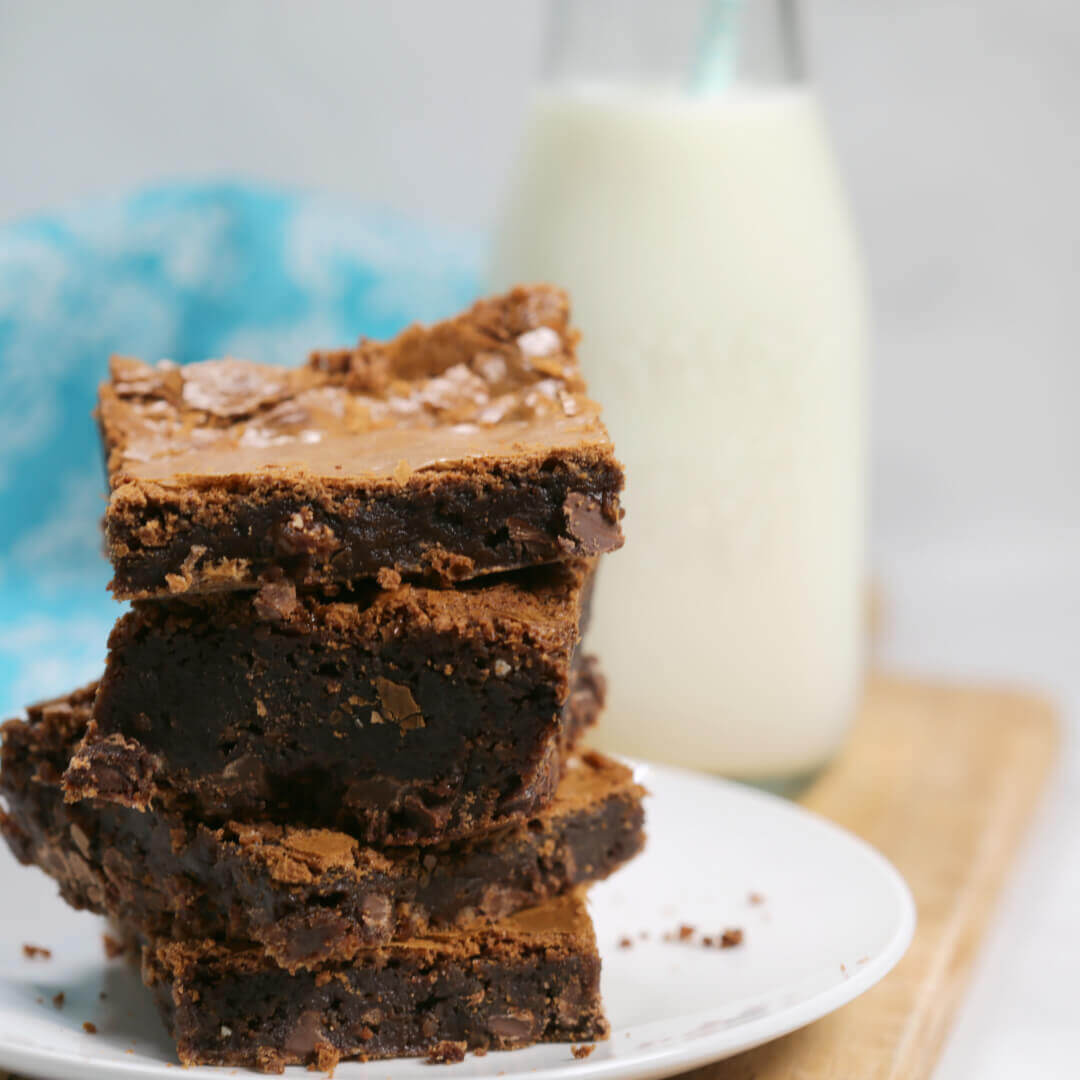 Plus, there’s my secret twist that I put on the recipe that really amps up the chocolate flavor.  Make sure you check out the full recipe at the end of the post.

How to Make Homemade Brownies

Making these easy homemade brownies couldn’t be easier.  The first step is always to put on my Mammy’s apron.  It makes me feel closer to her when I make them. 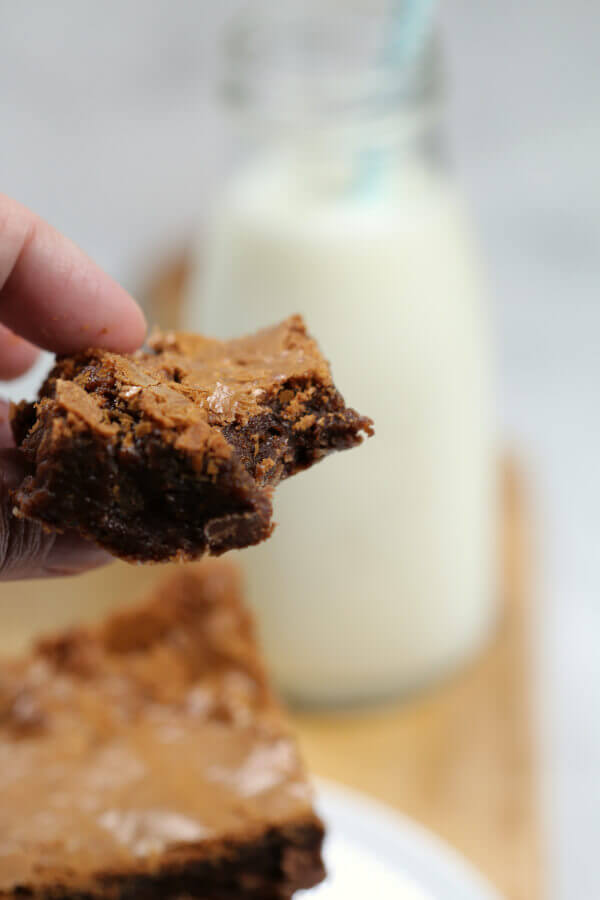 I start by making the chocolate mixture.  It’s a combination of butter, sugar and milk.  Milk really does make everything better.  I use whole milk when baking to add a little more richness to the recipe.

Then comes the chocolate.  This homemade fudge brownies recipe wouldn’t be right without a healthy dose of chocolate.  This recipe adds chocolate in two separate steps to really take it over the top.

After the wet ingredients are added, it’s time to sift in the dry ingredients into the batter.  I suppose you really don’t need to sift the ingredients if you’re in a hurry but doing so gives you a lighter brownie.  Plus, sifting is so relaxing.  I’m always in a such a rush to get things done.  Sometimes I just need to chill out and sift.  It’s good for the soul.

Once the batter is together, it’s just a matter of patiently waiting.  I think this is the hardest part of the entire process.

Mammy would always slice her homemade brownies scratch into neat little rectangles and neatly pack them between layers of waxed paper in a cookie tin (or even a department store shirt box).

While I was away at college, I received many homemade brownie care packages.  I would pour myself a big glass of milk, grab a brownie and sit down to read her letter – filling me in on all of the local news from home.  I treasured those times.

But, if she was serving them at a family get-together, her easy homemade brownies would be carefully arranged on her silver platter or her china serving plate with the little pink flowers. 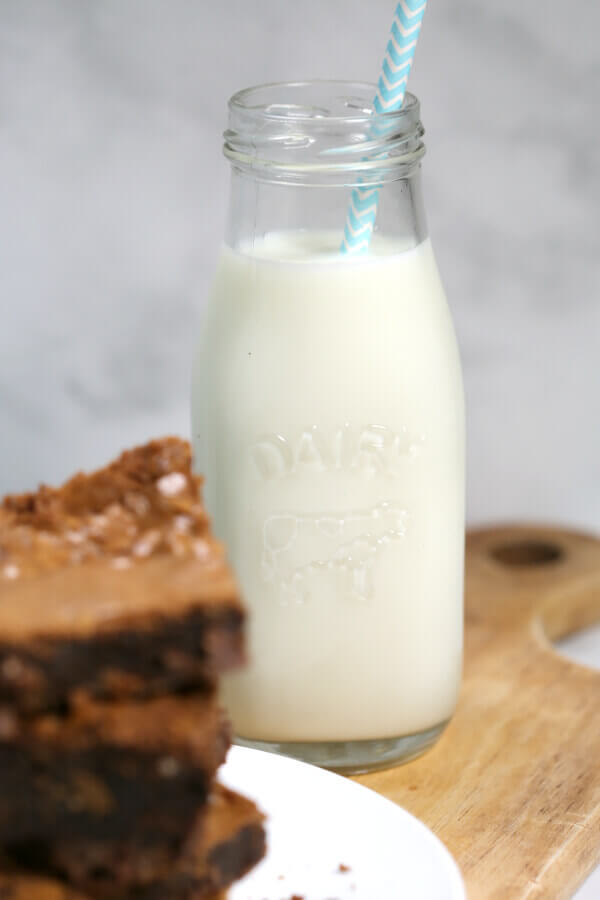 The only thing that made brownies taste better was a big glass of milk.  We are big fans of cow’s milk.  One cup has 8 grams of protein, no added sugar and a very short ingredient list. Non-dairy milk doesn’t have the same nutritional benefits as cow’s milk.

Not only is cow’s milk nutrient rich, but it’s also more affordable than plant-based milks.  Plus,  I think it tastes better.

If you’re lactose intolerant, you can even get a lactose free version of cow’s milk.  You can learn more here.

Looking for More Desserts that Go Great With Milk?

Looking for more?  Check out all of the Easy Desserts on It Is a Keeper.

Items You Need to Make this Homemade Brownies Scratch Recipe 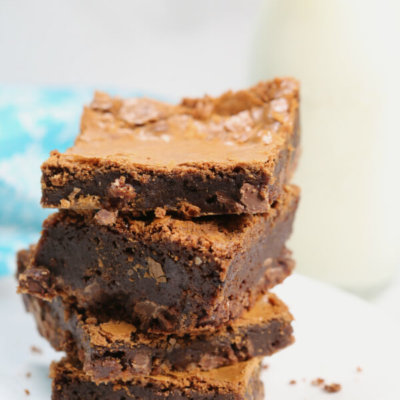 5 from 11 votes
My grandmother's Homemade Brownies scratch recipe is one of my most treasured recipes.  Her brownies were soft and chewy and oozing with chocolate flavor.
Print Pin Rate
Prevent your screen from going dark while you're cooking
Servings: 8 brownies
Prep Time: 10 minutes
Cook Time: 30 minutes
Total Time: 40 minutes

The coffee is completely optional, but it does intensify the chocolate flavor so I highly recommend it.

PIN THIS RECIPE FOR LATER!Follow Me: @ItsAKeeperBlog or tag #itisakeeper 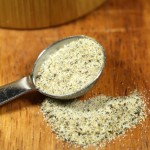