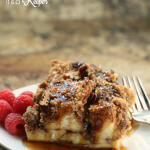 This Cinnamon Streusel French Toast Casserole is an easy make-ahead breakfast recipe that is sure to please your family.

When it comes to making breakfast I prefer easy recipes that don’t require much fuss.  And, a recipe gets extra points in my book if it can be made the night before.

This Cinnamon Streusel French Toast Casserole is the perfect combination of easy and make ahead.  It’s perfect for lazy weekend mornings or a family brunch.

This recipe actually works best when you make it the night before you plan to serve it.  I assemble the french toast casserole in the baking dish and I prepare the cinnamon streusel topping in a separate bowl and stash both containers in the fridge until I’m ready to bake it.

It really is the perfect balance of flavor and texture.  And, my family cannot get enough of this recipe!

And, if you have any leftovers, they are fantastic the next day.  Just place an individual portion on a microwave-safe dish and cover it with a damp paper towel.  Microwave on high for 1 minute or until heated through.

Here are some of the tools I used to make this recipe: 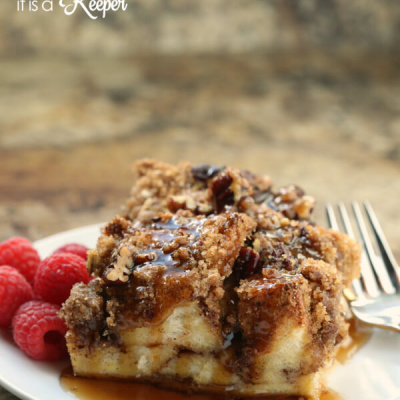